Invitation to a Conversation with the U.A.E. Minister of Economy H.E. Abdulla bin Touq Al Mari 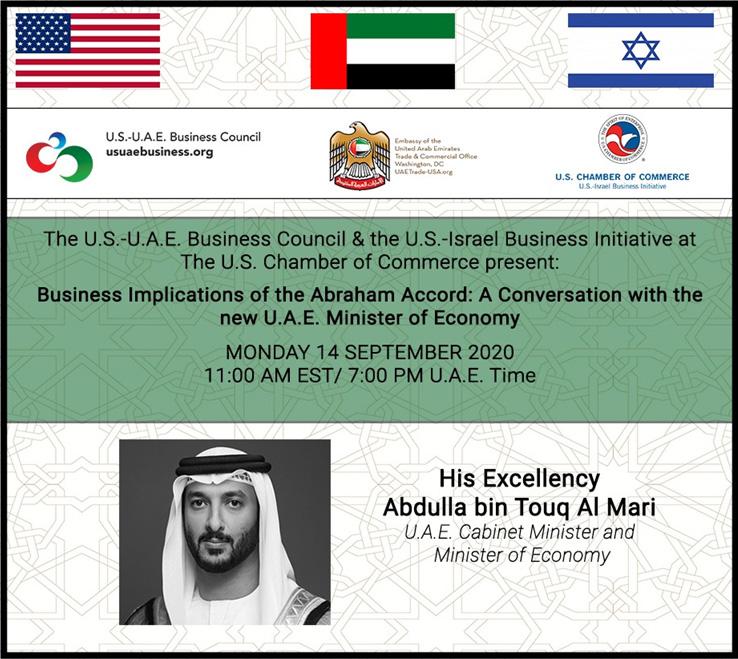 The U.S.-U.A.E. Business Council and the U.S.-Israel Business Initiative at the U.S. Chamber of Commerce, with the support of the Trade and Commercial Office at the U.A.E. Embassy in Washington, D.C., invite you to a special virtual event with U.A.E. Minister of Economy His Excellency Abdulla bin Touq Al Mari on the business implications of the historic Abraham Accord. The U.A.E. and Israel will officially sign the Abraham Accord on Tuesday, September 15th in Washington, D.C., making the U.A.E. the third Arab country and first Gulf country to establish diplomatic and normalized relations with the State of Israel. This landmark accord, which was brokered by the United States, offers significant new trade, business, and investment opportunities between Israel and the U.A.E. U.S. companies and investors will also play an important role in helping to establish the ties that will bind this new relationship well into the future.   During this webinar, the U.A.E.'s new Minister of Economy will focus on the opportunities for trade and commerce involving Israel, the U.A.E., and the U.S. that have been unlocked as a result of the Abraham Accord. The webinar will be forward-looking in nature and will cover key business verticals that hold promise for collaboration, trade, investment, and new joint ventures.   Also, during this session, His Excellency will address his recent appointment as Minister of Economy, the related restructuring of the Ministry of Economy, and his goals and objectives for the Ministry as the U.A.E. looks to emerge even stronger from the pandemic.   To register for this event, please click the link below. For more information, please contact Sarah Karle at skarle@uschamber.com.

Business Implications of the Abraham Accord: A Conversation with the New U.A.E. Minister of Economy